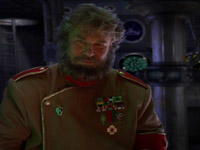 Leading the Soviet invasion is General Vladimir (not Vladimir Kosygin) whose forces push through Mexico and the East Coast. Coordinating the assault is Lieutenant Zophia.

Zophia is based in Moscow and has participated in over fifty successful campaign simulations.

Leading the Soviet portion of the assault is the Spetznaz hero Boris. Armed with a custom built AKM machine gun, Boris is renowned for his bravery and cool head on the battlefield.